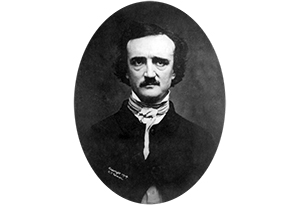 On what would have the master of macabre’s 211th birthday, a rowhome in Baltimore became a literary landmark to honor its former resident, Edgar Allan Poe.

The over 190-year-old structure, a modest rowhome located on Amity Street, became the Edgar Allan Poe House and Museum on Sunday. The organization bestowing the honor held a ceremony to celebrate adding the site to the United for Libraries National Registry for Literary Landmarks.

It’s the sole landmark of the registry in the whole of Maryland.

Enrica Jang, a member of Poe Baltimore, spoke at the ceremony commemorating Poe’s work. “He continues to inspire a new generation of artists and writers to this day.”

A historic preservation officer with the Department of General Services, Jackson Gilman Forlini, said, “This house receives its breath of life from Poe’s writing. Without Poe’s literary achievements, the house would have been torn down many years ago.”

During the ceremony, they unveiled a placard now accompanying the building to applause.

The renowned writer contributed immensely to the Western literary canon. However, few know of one of his contributions to the sport of football. The Baltimore Ravens, Maryland’s NFL team, took their name from one of the author’s most prominent works. Poe’s “The Raven” tells the story of a distraught lover after the loss of his beloved Lenore.

In the narrative poem, a speaking raven torments the unnamed narrator. First published in January of 1845, the poem went on to become one of Edgar Allan Poe’s most notable pieces of writing.

Unfortunately, while he became America’s first writer to live off writing alone, financial troubled dogged his life. Today, his worldwide acclaim garners him many earned credits as a progenitor of many genres. For instance, most consider Poe the originator of modern detective fiction. He also contributed to the burgeoning genre of science fiction, as well as horror.

His short stories inform generations of writers seeking a knowledge of craft in his work.