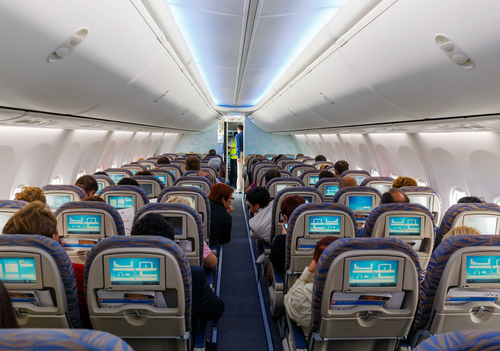 Passengers sitting on their chairs in airplane cabin

Baltimore – On Tuesday night police pulled off a female passenger on a flight from Baltimore to Los Angeles (LA).

It occurred after the passenger deceptively rejected to leave the airplane on her own.

According to reports the passenger Anila Daulatzai: a 46-year old art professor of Maryland Institute College, was complaining about an emotional animal support on board stating that “she is deathly allergic to the pet”. According to officials, the passenger was unable to provide a medical certificate required prove to allergy.

A Southwest official said that a passenger without a medical certificate may be deprived of boarding if they report a serious allergic reaction as well as cannot fly safely with an animal on board.

After explaining the situation, the passenger refused to leave the airplane, and law enforcement was forced to step in and pull her off.

Early reports show the passenger in the video stated that she had a life-threatening pet allergy, but she was not able to provide the medical certificate essential to complete travel. There were one emotional support animal and one pet onboard the airplane. Our policy states that a Customer (without a medical certificate) may be deprived of boarding if they report a serious allergic reaction and cannot fly safely with an animal onboard.

Our Flight Crew made repeated efforts to explain the situation to the Customer, however, she refused to deplane and law enforcement became involved.”

Daulatzai was arrested and currently faces a number of charges with disorderly conduct, fighting arrest, and hindering a police officer.