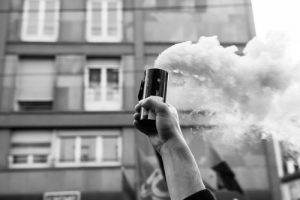 It’s officially summer in Baltimore which means the hot and humid weather will soon return.

Maryland Secretary of the Environment Ben Rumbles said, “The good news story is that Baltimore City, in fact, exactly where we’re standing, the air is getting dramatically cleaner. It’s improving just over the last several years,” and added, “The steps that have led to that are important regulations that reduce pollution from power plants, smokestacks, and tailpipes.”

Clean Air Partners launched the Breathe East campaign by recommending simple steps residents can take to improve air quality. They include using public transit, filling your gas tank after dusk during the summer and turning off lights and electronics when not in use.

“For healthy people like me it may just mean a little bit more shortness of breath and maybe irritated eyes but for people who have a pre-existing health condition, asthma, for example, it could be life-threatening,” said Dr. Janet Phoenix of George Washington University.

There is a real progress in solving the poor air pollution problem in Baltimore City and across Maryland, but it’s pushing the EPA to do more.

“I’ll be testifying in Washington, D.C. tomorrow to push the EPA to do more with those power plants in five states upwind of us to run their controls just like we do — to scrub that pollution from the power plants,” said Ben Grumbles, Maryland Department of Environment Secretary.

Additionally,  2 students from John Poole Middle School in Montgomery County, Weronika Kitlinska, and Claudia Colon, won awards for creating artwork about the importance of air quality and the environment.

Audi A3 Excites with Style Prominent in Latest Aesthetic Developments

Open and Enclosed Transport: What Are the Differences?