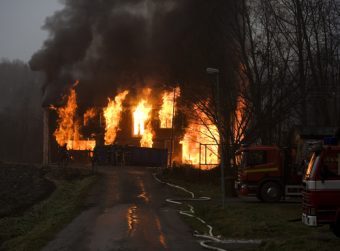 Baltimore, Maryland —Fire crews in Baltimore are battling a four-alarm fire this Friday morning. A 150-year-old Fells Point paint shop is in the fire.

The Baltimore City Fire Department got reported about the fire around 3 a.m. The building is located on the 400 block of South Broadway.

The fire increased rapidly from a three-alarm to four-alarm. About 50 residents were forced to evacuate, among them was Fells Point resident Ben Orlando.

According to Baltimore City Fire Chief Roman Clark, the fire was extinguished as of 8 a.m., but the firefighters are still at the scene. About 100 firefighters responded to fire.

It reached till the neighboring church. The smoke could be seen from Interstate I-83.

Fortunately, the four-alarm fire didn’t bring injuries to anybody.  Fire officials are still trying to figure out what was the cause of it. But they haven’t determined yet.

The old building has been located on South Broadway since 1868. The shop expanded over the years and spread across six adjoining buildings, including a church.

Fells Point is a national historic district, according to the website.