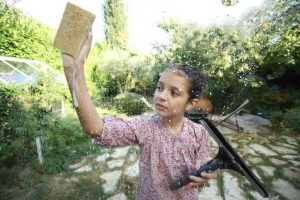 The city’s leaders search for solutions, meanwhile, I-Team seeks a perspective while others didn’t even hear about before.

One of the kids, Donnish Ratchford, 20, said the job helps her survive. “The money until I find employment,” said Donnish.

Shaquiah Allen, 26, also does the same job with windshields at North Ave. near I-83 and Mount Royal Ave. in West Baltimore. According to her, it’s not only a way of earning some cash but it helps her to get skills with people, and how to deal with people with different personalities.

During a ‘good’ day, one can earn around $80. And kids do face some people with not so good attitudes. One of the examples is a 76-year-old man, who asked to remain incognito, called 911 with the report of being blocked while stopped at a red light.

Due to his report. A couple of kids damaged his vehicle with a squeegee when he refused them to wash his car. After he refused to give a dollar for the washing as he got assaulted.

Donnish and Shaquiah consider this kind of situations as wrong and disrespectful.

The squeegee kids’ issue is a huge one and made a big debate in 1985 as well. In order to move some of the squeegee kids from a West Baltimore neighborhood, the city decided to install some fencing at Hilton Str. and Gwynns Falls Parkway.

The Baltimore Police Department contacted with I-Team to notify they are contacting with different agencies to solve the problem.  The solution includes talking with young people in order to understand their needs which includes finding employment.

Until now, police are getting complains about squeegee kids drinking, doing drugs etc. According to the police department, the issues are being watched by them and the troublemakers are being tracked. Over 5 arrests have been made during January and September.

All the kids are hoping for a regular employment which will keep them away from the job like this one.