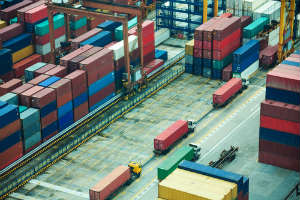 Even though temperatures are below freezing, truckers are still protesting at the Baltimore Container Terminal. Why? Because delays leave these truckers waiting in their trucks for as long as eight-hours just to pick up one container.

A few weeks ago, the port could have blamed slow rates on the government shut-down. Although, even since the shutdown has ended, the process has not sped up.

Giant new ships have been dropping off record-breaking numbers of containers. The company in charge of the Baltimore Port, Seagirt Marine Terminal, is Ports America Chesapeake. Baltimore’s own port was brought into the company after a 50-year-1.3 billion-dollar deal signed by the Maryland Port Administration.

The port now has four super-sized cranes, but there are not enough laborers or equipment to keep up with them. More than 50 truckers were picketing last Wednesday by the terminal’s entrance on Broening H.

The truckers are simply asking for more workers to keep up with the number of trucks that cycle through the port.

Also, once in line for the terminal, truckers can’t get out of their cabins. This means that truckers have to weight six to eight hours to use the restroom or get something to eat. Trucker’s are taking a stand. The protests are for both their financial rights and their health rights.

Since a lot of the truckers are independent owner-operators, the delays take money out of their own pockets. Independent drivers get paid per load, so delays eat up their time and money.

Unfortunately, the issue has continued for over a year. The cranes didn’t lighten up the congestion because there were not enough people to control them.

So, are you on the truckers’ side? What do you think about the strike?