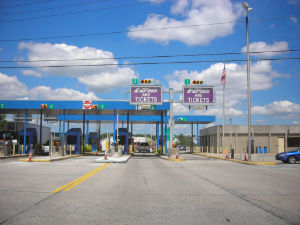 There’s a shake-up coming to the Maryland transportation scene. Or should I say a change for the better? The tolls on the Francis Scott Key and Thomas J. Hatem Memorial Bridges are set to become cashless in October. Maryland Transportation officials announced this on Thursday.

Going forward the 60,000 drivers who cross those bridges each will pay either by E-ZPass or by means of video tolls. This technology takes a picture of the vehicle’s license plate then promptly sends a bill to the driver’s address.

Furthermore, the Maryland Transportation Authority, which manages the state’s toll operations, will spend $26 million to raze the current toll plazas and repave the roads approaching the bridges and then install video tolls.

According to Transportation Secretary Pete Rahn, with the plazas no longer there, tolls will be collected while cars drive at highway speeds. In fact, the State of Maryland as outlined a plan to update all of its tolling facilities. The Hatem and Key bridges were selected first because they attract a large number of E-ZPass drivers.

Officials have not announced a timeline for when the toll booths will all become cashless.

The Benefits of Cashless Tolls

In addition to being a seemingly more efficient method, cashless tolling offers some other tangible advantages. This system should reduce congestion, bring down car emissions, enhance driver safety and generate savings for the drivers. No doubt the average driver can get on board with these benefits.

Rahn says, “Each driver at the Hatem and Key bridges will save $1 million in fuels and 44,000 hours just by not stopping in toll lanes. This means no more stopping and searching for money.”

Even better, the five full-time Transportation Authority toll collectors will be transferred to other jobs within the agency. They will not be victims of this new mechanized system.