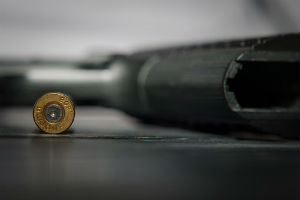 BALTIMORE, MD – A Maryland murder victim was simultaneously married to two different men. The woman was killed as she exited her office. In fact, police revealed one was a convicted Baltimore drug kingpin.

Police in Greenbelt maintain that the 44-year-old Bettie Jenifer of Bowie, departed from her office in the 6300 Block of Ivy Lane around 5 p.m. The murder victim walked to her car when police say a man carrying a handgun approached.

Bettie Jenifer fled, however, the man followed her and fired multiple rounds. Police say one bullet struck her in the head. The suspect immediately sped away in a nearby vehicle.

According to the police, the suspect is black and has a thin build with black hair. Dressed in dark clothing, the suspect left the scene in a blue car.

Police confirmed on Saturday that the murder victim was married to Chris Attoh. He’s a beloved actor and TV host in Ghana. The couple just married in October. Furthermore, Jenifer was also married to 47-year-old Kedrick Jenifer, who is in prison serving a 20-year sentence for importing significant amounts of cocaine into Baltimore and Texas.

According to the U.S. District Attorney’s Office, Kedrick’s drug trafficking organization moved at least 450 kilograms of cocaine in Baltimore and Woodbridge, Virginia.

According to police, the murderer targeted Bettie act and not a random. However, at this time they haven’t pinpointed an exact suspect.