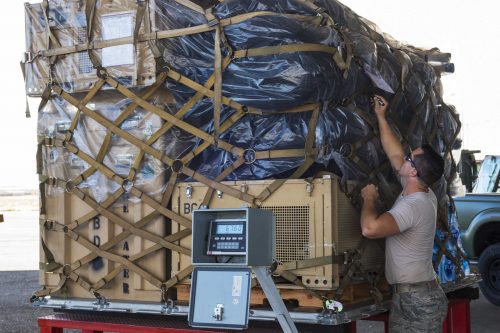 A U. S. Air Force Airman marks the total weight on a cargo pallet as Airmen from the 621st Contingency Response Wing and the 60th Aerial Port Squadron work together to prepare emergency vehicles food, water, fuel and other supplies to be transported to one of the many areas affected by recent hurricanes in the southern United States and eastern Caribbean Sea, Travis Air Force Base, Calif., Sep. 20, 2017. All cargo must be accurately weighed, measured, cataloged and documented to ensure it is safe to load onto heavy-lift aircraft, bound to destinations that have been devastated by major storms this season. (U.S. Air Force photo by Heide Couch) (U.S. Air Force photo/ Heide Couch)

Baltimore residents spotted military vehicles and personnel over the weekend across the city. On Friday, the Maryland National Guard confirmed their presence.

Their arrival follows a request by Mayor Jack Young for their assistance. After declaring a state of emergency, Governor Larry Hogan activated the state’s National Guard. His office calls for their assistance across Maryland to assist in local efforts during the public health crisis.

Over 2,000 troops are expected to be deployed.

Lt. Col. Wayde Minami explained troops organize into smaller groups for specific missions. While the public spotted troops around the Marriott Hotel, and vehicles beneath an overpass near M&T Bank Stadium, none currently attend to any mission.

Instead, Minami said, the MD National Guard stages in preparation for a variety of tasks.

Governor Spokesperson Mike Ricci listed a number of tasks each unit addresses. For example, he stated units assist patient transport and temperature screenings at state facilities. Additionally, they will help set up triage tents at hospitals, as well as lending support to staff at the State Emergency Operations Center.

Military to Assist, Not Enforce

In a statement addressing the presence of the military personnel and Humvees, Mayor Young said, “I am confident that the deployment of the National Guard will help ensure Baltimore City has everything it needs to fully address COVID-19.”

Still, the sudden appearance of military in Baltimore streets put some residents on edge.

Some took to social media posting about the military presence across the city. In response, the MD National Guard made a Twitter post reiterating their purpose.

While they have yet to identify particular missions, the Guard already engaged with the Strategic National Stockpile, a reserve of drugs and other medical supplies located near the nation’s capital.

Mayor Young states they will “provide humanitarian assistance in partnership” with local agencies to combat the outbreak.

A Man Was Shot At His Brothers’ Burial Service: Retaliation Shooting in Baltimore